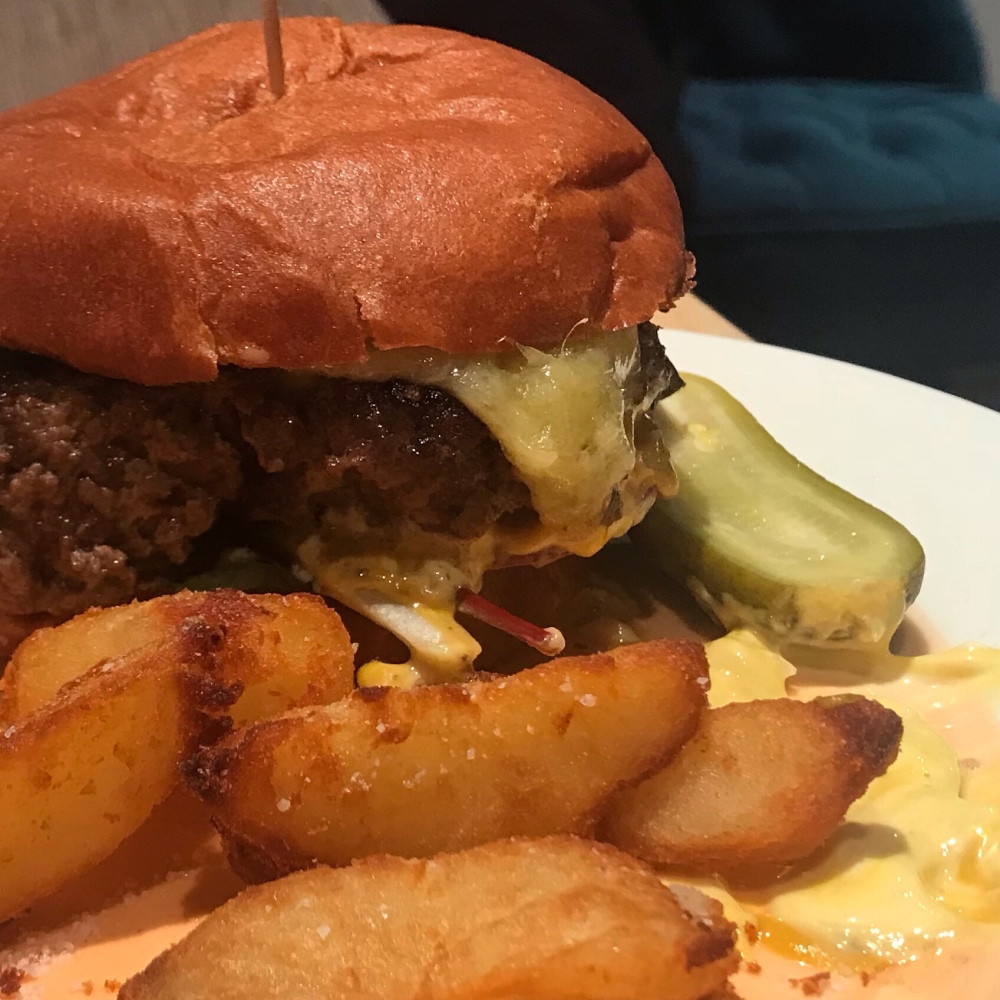 Recipe from Hawksmoor At Home

Available to buy from https://www.amazon.co.uk/Hawksmoor-Home-Breakfasts-Puddings-Cocktails/dp/1848093357

We were having a friend round for dinner and it seemed like a good excuse to cook something a bit less healthy and a bit more calorific. I love the Hawksmoor restaurants but I would never go there and order anything other than their fantastic steaks, so I was curious to see what their burgers might be like.

Difficulty rating- 2/5, you might need to go out of your way to get bone marrow but otherwise everything’s fairly straightforward.

For how many people? 3

Total time taken (according to the recipe)- No timings given

I started off by peeling the potatoes, cutting them into wedges and parboiling them in salted water for six minutes. I drained them and let them air dry for about ten minutes. I returned them to the pan with the lid and shook them up to create texture on the outside of the potatoes then I put them in the fridge until I needed to move onto the next stage.

Just before I made the burgers, I deep fried the potato wedges in two batches at 130°c for three minutes, drained them and dabbed off the excess fat with kitchen paper, then allowed them to cool while I made the burger patties.

I removed the bone marrow from the beef shank bones and cut it into 1cm cubes. I mixed this with the beef mince and shaped it into three patties before putting them onto a plate, covering them with cling film and placing them in the fridge, along with the part cooked chips, until we were ready to have dinner.

Half an hour before cooking them, I removed the burgers from the fridge. I prepped all the sauces and salad items for the burgers and put them in separate containers so that people could build their own when the patties were cooked and I made my husband slice the Ogleshield cheese ready to go on top.

I heated the frying pan until it was very hot and then seasoned the burgers and added them to the pan, cooking for four minutes on each side. About halfway through, I heated the grill to medium and lined a baking sheet with aluminium foil, sliced the burger buns in half and started toasted them in a dry frying pan.

Towards the end of the burgers’ cooking time, I remembered the chips. I misread the temperature on the recipe and heated the deep fat fryer to 130°c before frying the first batch for 3 minutes. When they didn’t seem to darken in colour, I realised the fryer wasn’t hot enough, checked the recipe and adjusted the fryer to 180°c (the recipe says 190°c, but our fryer doesn’t go that high.) When the fryer had reached the increased temperature, I fried the first batch again until they coloured, then fried the second batch for 3 minutes.

When the burgers were cooked I put them on the lined baking sheet, placed the cheese slices on top and put them under the grill until the cheese melted.

When all the elements were ready, we built our burgers with the sauces and salads and served them with the chips.

I didn’t go the extra mile to fry the chips in beef dripping, but used vegetable oil instead.

We don’t have a mincer so bought pre minced beef for the burgers.

I didn’t make my own burger buns although they do include a recipe for them in the book.

You should be able to get bone marrow from a good butchers and if you’re going to buy mince instead of mincing your own beef, you should get that done at the butchers too. If you don’t have a good local butchers, there are now some really good online ones which are listed in the cookbook. I used Turner & George, which I find very reasonably priced for the quality of the meat- the mince was no more, if not less, than you’d pay for the same amount high welfare beef mince in a supermarket and was incredibly high quality.

If I had more time and we were serving more people, I might try and make the buns from scratch as well.

I absolutely loved it. The burgers were cooked perfectly medium. They were meaty, juicy and tasty and the Ogleshield worked perfectly with them. The chips were fluffy inside and perfectly crunchy on the outside.

Verdict– 5/5, to get such strong positive reactions the first time I’ve ever made burgers and chips from scratch, it must have been an amazing recipe.