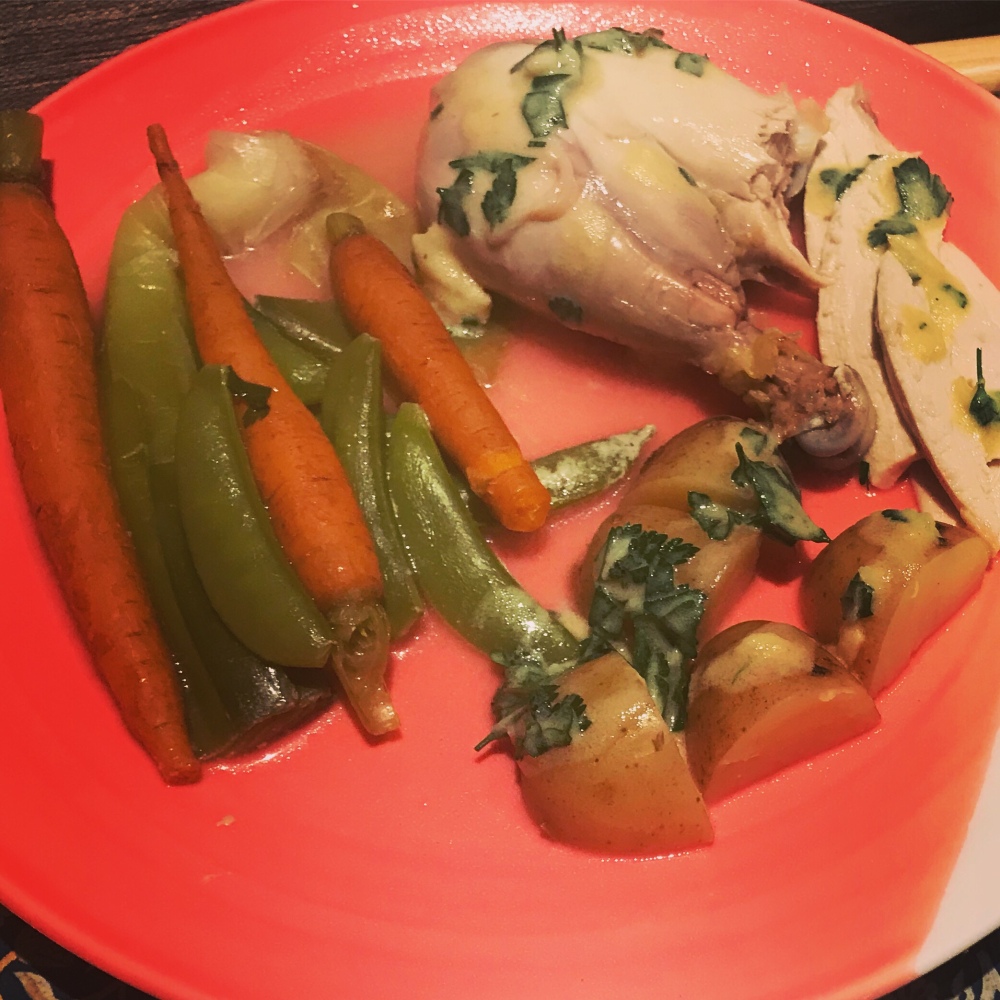 The recipe hasn’t been made available online. If this changes I will post a link here.

This seemed like a light but filling dish for our Friday evening meal. As spring has arrived, poached meat and baby vegetables capture the season really well.

Difficulty rating- 2/5, nothing complicated to do but it helps to have poultry carving skills. I don’t, I always have to ask my husband to do it!

For how many people? 6

Total time taken (according to the recipe)- 1 hour

Hands-on time (according to the recipe)- 10 minutes

Hands-on time taken by me (including ingredients prep)- 20 minutes

Cooking time (according to the recipe)- 50 minutes

Today my husband (J) was in while I was making dinner so I had a sous chef in the kitchen. I halved the garlic bulb and put it into the stock pot along with the chicken, breast side down, and peppercorns while J separated the parsley leaves from their stalks. Realising I didn’t actually have any cook’s string and not wanting to replicate a Bridget Jones style ‘blue soup’ incident, I added the stalks and bay leaves loose to the pot. I poured in enough cold water to cover the chicken and brought it to the boil, which took upwards of twenty minutes as there was so much water to heat.

When the water had reached a boil, I turned it back down to a simmer and left it for twenty five minutes. The recipe advise putting the lid on at this point, but I missed that instruction somehow. It didn’t seem to make any difference.

After twenty five minutes, I turned the chicken over using kitchen tongs. I then added the new potatoes and my selection of baby vegetables to the pot- leeks, carrots & sugar snap peas. The new potatoes I was using were quite large so I cut them into smaller chunks to ensure they’d cook through properly as undercooked potatoes can really put a damper on an otherwise excellent dish. At this point I did decide to put the lid on the pot, independently of the missed instruction in the recipe, as it was very full now the vegetables had been added and I was worried about the water overflowing.

I left that to simmer for another twenty minutes then removed the chicken from the pot. I used a meat thermometer to check the chicken was cooked (it was) and set it to one side to rest.

At this point I was supposed to remove the pan from the heat, but I was still a bit worried about the potatoes being cooked properly so I kept it simmering as I took a few ladlefuls of the poaching liquid out of the pot and into a mixing bowl, whisked it with two tablespoons of Dijon mustard and the sea salt and returned it to the pot and then took the pot off the heat. I tasted the poaching liquid after stirring this through and decided to add a bit more salt.

I roughly chopped the parsley leaves, took one of the halves of the garlic bulbs from the pot and removed a few cloves from it into a small mixing bowl, cursing my lack of asbestos fingers, added the rest of the mustard and two tablespoons of poaching liquid and extra virgin olive oil to the bowl and mixed all of them together and then added the chopped parsley leaves. I tasted the dressing and decided that it was a bit too astringent for our tastes and it was very thick, so I added another two tablespoons of the poaching liquid to the dressing.

While I was making the dressing, J carved the chicken, whose breast meat apparently sliced much more easily than a roast chicken.

I cut a couple of slice of crusty white bread for each of us and plated up the chicken, vegetables & potatoes with some poaching liquid and served the dressing & bread at the side.

I added more poaching liquid to the dressing.

As there were only two of us, we used a smaller chicken, 1.7kg rather than the 2.2kg specified by the recipe.

The recipe didn’t specify using cold water at the beginning of the recipe so boiling a few kettles might save some time, I just have it in my head that when poaching a chicken you should start with cold water. I have no idea where I got that impression or if it’s true!

It’s such a simple recipe, don’t be afraid to make small changes that suit your tastes!

Serving Size- With a little bit of bread at the side, it was perfect- I felt satisfied but not stuffed.

The chicken was beautifully moist. The dressing was zingy and added some more interesting flavours to the dish. The vegetables had just the right amount of bite left in them. It would be perfect to eat al fresco on a warm summer’s day with a crisp glass of Provence rosé or a southern French white.

My husband really liked how moist the chicken was.

Verdict– 4/5, this was a fantastic meal and the recipe was well written & easy to follow, but it did take fifty percent longer to make than the timings given in the recipe.