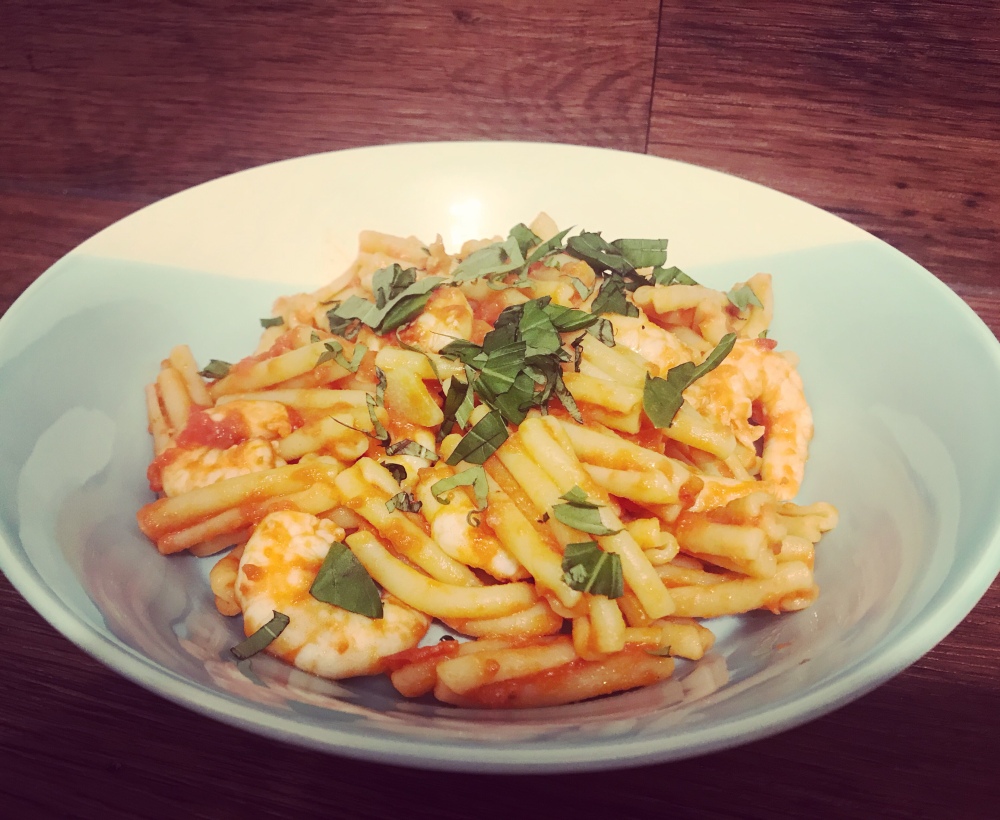 Seafood pasta is a massive weakness for me. If there’s ever a time when through circumstances or sheer exhaustion I have to opt for a ready meal, you can all but guarantee it will be seafood pasta in some way shape or form. Likewise in Italian Restaurants, I’ll so often cave to the temptations of a mound of pasta covered in glistening sauce with crab or prawns poking out of it. So when I see a recipe promising I’ll be able to throw the same thing together for myself in twenty minutes, naturally I want to put it to the test.

For how many people? 4

Total time taken (according to the recipe)- 20 minutes

Total time taken by me- 30 minutes, it’s all hands on & cooking time.

This dish was so easy to make, as so many pasta dishes are. I sliced the garlic and got the other ingredients ready. I didn’t want to damage a tablespoon measuring spoon trying to scoop fridge-cold hard butter, so weighed out 25g instead. I also booked a kettle for the pasta.

Towards the end of the prep, I took out the frying pan and put it on the medium heat so it would have time to reach the heat before I added the oil and garlic. I wish I’d done this earlier, but I never seem to get the timing quite right when heating my pan before use, so it was still not quite hot enough when the oil and garlic were added, meaning I needed to fry the garlic for slightly longer than the 2 minutes specified to turn it golden.

While this was frying, I put the pasta on to boil. I couldn’t get Fiorelli, so used Casarecce, which was the most similar pasta shape I could find. As always, I generously salted my pasta water.

I was naughty and used chopped tomatoes instead of plum tomatoes in the dish as I already had some in the cupboard- I am fully aware that San Marzano plum tomatoes are meant to be the best and will try to use them if I make the dish again, but I am a home cook and can’t always manage to get very specific ingredients.

While the sauce was simmering, I chopped up some fresh basil to sprinkle over the dish when serving.

After the sauce had simmered for ten minutes, I added the prawns. Then I drained the pasta, keeping a mug of the pasta water to one side. The prawns took slightly longer than the usual three minutes to turn pink, maybe I should have had the pan on a slightly higher heat, but when there was no translucency left in them, I added the pasta back to the pan and stirred it through the sauce, adding a tiny splash of pasta water. I then stirred through the butter and was finished!

As mentioned, I used chopped tomatoes instead of plum tomatoes.

The recipe actually gives all of my usual pasta tips- salting and reserving pasta water being the main ones!

Apparently you can buy Fiorelli from M&S but if you can’t find that or Casarecce, try to find a pasta that will catch lots of the sauce. Orecchiette might be a good choice and I’ve never known a supermarket not to stock it.

I’d use the tomatoes specified to see if it made much of a difference to the flavour.

I might experiment with a squeeze of lemon juice to see if that lifts the flavours still further.

Serving Size- generous. I put more than half of the full amount in the fridge as leftovers after two of us had eaten what we thought was a dinner sized portion.

It was absolutely fantastic. The tomatoes and butter worked really well together so the tomatoes weren’t too tart and there was no greasiness from the butter. The prawns were juicy and well complimented by the garlic in the sauce and the basil sets it all off perfectly. Even though Casarecce wasn’t the pasta called for in the recipe it did a great job of catching the sauce.

My husband also really enjoyed it and agreed that if we make it again it might benefit from seasoning with lemon juice.

Verdict– 5/5- the recipe was easy to follow, the food was on the table in less than half an hour, it tasted amazing and it was healthy. I can’t find a good enough reason not to give it full marks!