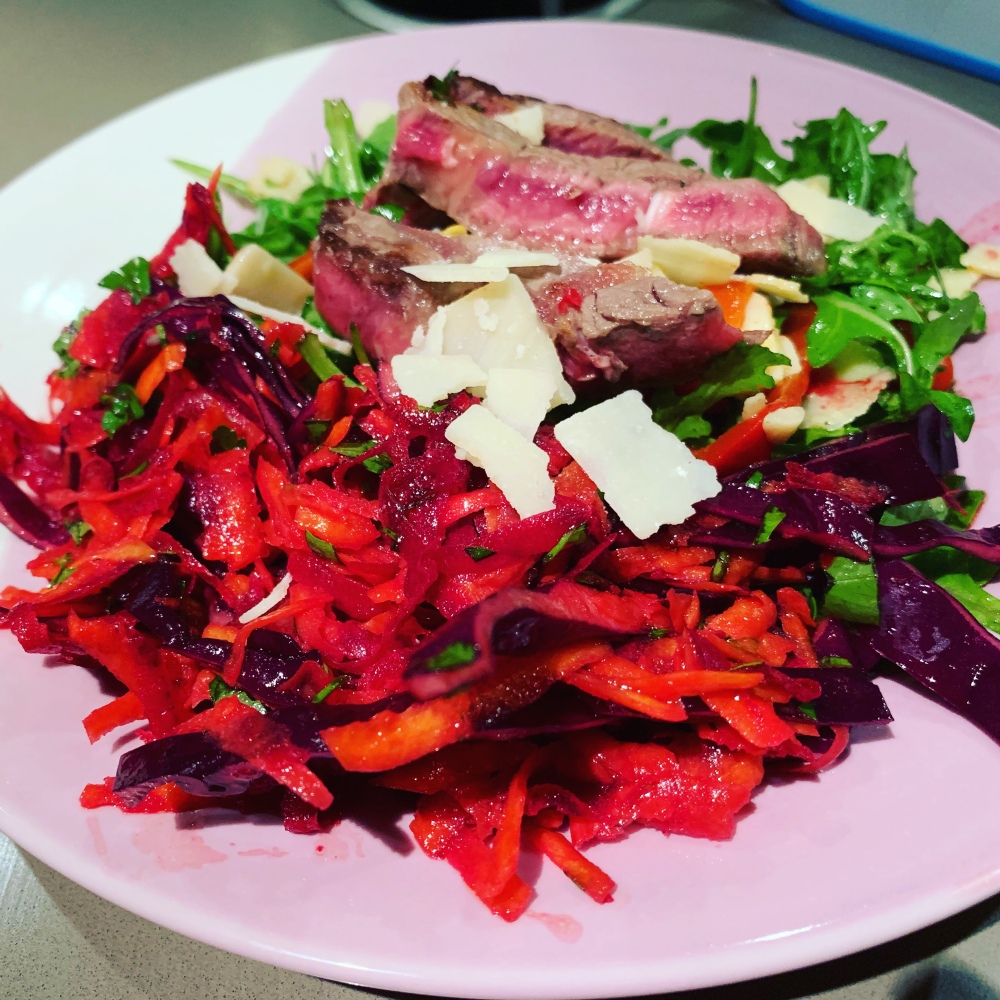 This recipe hasn’t yet been uploaded to the website but when it is I will update this post.

After a bit of a break from reviewing recipes (although not from cooking them!) after having a baby, I’m jumping back into critiquing them. After a series of both really positive and really disappointing recipes, I remembered why I started to do this in the first place.

Post baby AND post Christmas, I’ll be focusing on slightly healthier recipes for a little while. This Mediterranean take on a steak salad seemed luxurious enough for a Saturday night in but healthy enough not to carry a dose of guilt afterwards.

Difficulty rating- 2/5- this is really a very straightforward recipe.

Tongs for tossing salads & turning steaks. I used 3 separate pairs but one pair washed up between uses would do.

For how many people? 6

Total time taken (according to the recipe)- 40 minutes.

Total time taken by me- 30 minutes

Hands-on time (according to the recipe)- not specified.

Hands-on time taken by me (including ingredients prep)- 30 minutes

Cooking time (according to the recipe)- 5 minutes

Cooking time taken by me- 5 minutes

Before doing anything else, I took the steaks out of the fridge.

I begun by slicing the cabbage while my husband grated the carrots. I then peeled the beetroot for him to grate and I chopped the parsley. We put everything into a large mixing bowl as it was ready. I put all the ingredients for the dressing in a small jug, whisked them together and tossed it through the slaw.

I put my griddle pan on the hob over a high heat (8 on my induction hob), while I halved a garlic clove, removed the steaks from their packaging, rubbed the garlic over each side of the steaks and sprinkled each side with salt. When the pan was very hot, I placed the steaks on the griddle pan. After 2.5 minutes, I flipped the steaks over with the tongs, cooked them for the same amount of time on the second side then placed them on a plate to rest for five minutes.

While cooking and resting the steaks, I sliced the roasted red peppers and put them into a second bowl with the rocket, most of the parmesan and a glug of olive oil, then tossed everything together before dividing between our plates.

When the steaks had rested for long enough, I sliced them against the grain and divided them between the plates, then served the slaw at the side.

I didn’t make this dish alone but enlisted my husband’s help as sous chef. I also only made half of the amount specified, as only 2 of us would be eating. I think both of these contributed to the recipe not taking as long as stated.

I left out the red onion as my husband doesn’t like raw onions.

I was lazy and used pre-shaved parmesan.

Make sure to take the steak out of the fridge before you start making the recipe. I only took it out as I started preparing the slaw, fifteen minutes earlier would have been better.

Make sure your griddle pan is super hot before placing the steak on it. If I made it again I’d probably go for 9 instead of 8 on our induction hob, which is as hot as it goes. You know your own hob. SUPER hot.

If you don’t want purple hands, it’s worth wearing gloves before preparing the beetroot. We didn’t on this occasion, but we do have a supply of gloves in our cupboard for cleaning and preparing hot chillies or fresh turmeric. Biodegradable gloves are now available.

If my husband wasn’t here I would include the onion.

As mentioned above, I would have used a higher heat to cook the steak and removed it from the fridge earlier.

The slaw would definitely have benefitted from the zing of the red onion, but that was my (well, my husband’s) fault not the recipe’s. The dressing was well balanced. All the flavours went well together and the steak meant that this healthy dish felt a bit more indulgent.

My husband felt the juiciness of the steak offset out the slightly more virtuous salad to make a well balanced dish.

Verdict– 3/5- it was easy to make, healthy and enjoyable, but not exceptional in the eating and some of the instruction would have benefitted from more precision.